Jesus also, that he might sanctify the people with his own blood, suffered outside the gate.  Therefore, let us go forth to him outside the camp, bearing his reproach.  For we have no continuing city here, but we seek one to come.

Instructions in the Faith for Spirit-filled Believers

"I in them, and thou in me, that they may be made perfect in one."

Jesus earnestly prayed that the Father would make us all one, and yet God's people are divided by conflicting doctrines and traditions into a thousand different sects.

This book is the result of four visitations from the Lord Jesus to me over approximately four years, beginning in the summer of 1975. The first time that the word of God came to me, it was as if I had been sitting in darkness my whole life, without knowing it, and suddenly someone turned the light on. I think you will feel enlightened as well, as you read this book. Prepare for an adventure in faith.

Why Me and Why This Book

Early in this century, when the Pentecostal experience was freeing the hearts and souls of so many in America, there was a small, scattered group of Pentecostal ministers who began to teach a doctrine they claimed had been revealed to them by God. They stirred many a mind with this teaching, but it never gained wide acceptance. Only a very few congregations, sprinkled among the Pentecostal community, held to this doctrine.

A very young and relatively well educated Pentecostal minister, George Clark (now approaching his 80th year), was recruited by his Overseer to visit these congregations and bring them back to the standard denominational line. This he assayed to do, and, in fact, he did persuade some of the ministers to refrain from teaching such things in regular services, at least until they "got more light on it."

Not long afterwards, "Preacher Clark", who is my father, became increasingly burdened for the denominational divisions which existed among Pentecostal people, and, determined that God could unite the body of Christ, he began to pray for the answer. He supposed that he would pray an hour or so, but his communion with God did not stop until weeks later.

From that time, miracles and healings became an integral part of my father's ministry, and, in addition, God began to teach him scriptural and spiritual truths for the sake of uniting His people. Much to his surprise, the truths which God began to open to my father were the very doctrines he had labored to convince those small, scattered congregations to renounce.

Forthwith, he returned to each congregation to tell them their pastors had been right and that he had been wrong. Having fulfilled that responsibility, he went directly to the Overseer, sat down with him and the Bible, and showed him the truths he now understood. The Overseer could not argue with what was laid before him. He simply said, "Brother Clark, we cannot change 30,000 people [approximately the number of Church of God members at that time]." Then he added as he and my father embraced and wept, "Brother Clark, please don't leave the church."

My father didn't leave. Later, however, his license was revoked and he was ousted from that denomination for "teaching doctrines contrary to the church." But contrary to the church or not, the truth had to be taught to God's people, and my father and others continued preaching and teaching wherever possible the doctrines no man taught them.

By the time I was born, the dust of those early events had settled; the participants were growing old and dying. The non-denominational prayer meetings my father led at Grandma's house had been continuing fairly regularly for nearly 20 years. My father was 50. My mother was 26 years younger.

I knew of, but never knew any other religion than those home prayer meetings. There were no committees, building funds, or bazaars. There were no contentions for authoritative positions. There were no patterned forms of worship. The saints would gather on Sunday afternoon in Grandma's living room and begin to pray or sing or testify to whatever God had done for them or through them that week. This is the faith I learned.

At age 22, just months before I entered the seminary, I could not have told you what a seminary was. (At times I still wonder.) Nevertheless, my only difficulty in being accepted to the seminary was the requirement of a recommendation by the "Board of Deacons" of my local church. There was no such thing down at Grandma's. All of those sorts of ecclesiastic or ritualistic systems and ceremonies were foreign, strange, and a little suspicious to me. I was an alien to the Christian religious world as you know it.

I still am numbed by confusion when asked to what denomination I belong. I haven't yet found an answer to that question which does not communicate hostility. When I say "independent", my utter and willing dependence and reverence for Christ and my brothers and sisters everywhere, is belied. Or when I say "none", that communicates a rebellious, government-despising spirit. I never will forget the contemptuous eyes of one professor at seminary when he looked at the "none" on my transcript and demanded, "And just what is it that you have against the organized church? Don't you believe in God?"

So, I really haven't learned the gentlest response for questions concerning to which faith I belong, for that there exists but one faith in God's kingdom is all I have ever been taught and experienced.

After seminary, I entered for a short time the Oral Roberts Graduate School of Theology. While there, I heard a professor express regret that there was no unifying theology in the Pentecostal-Charismatic community. Coming from every denomination and social level, spirit-baptized people hold to all kinds of ideas and creeds concerning salvation, Spirit-baptism, and other spiritual experiences and doctrine. He said that the Spirit-baptized people needed a uniting theology, and he was speaking the truth. My desire to write this book received that much more impetus from his words, because I knew the truth that he was saying God's people needed! I knew then, as I know even more surely now, that the uniting truths which God's people are looking for and needing are the simple truths I had known from childhood.

Shortly thereafter, I left Oklahoma and returned to the prayer meetings and fellowship of the saints who had taught me Christ. I wanted to record the divinely revealed truths I knew would help the children of God who were scattered everywhere. Burdened by the divisive doctrines and deadened forms I had seen among God's people, I prayed for guidance in the presentation of the way. I prayed that I might be granted understanding and ability to communicate faithfully to God's children the beauty and order and freedom I had always known of Christ, and to show my brothers and sisters of every denominational persuasion how they might be one in faith and practice as well as in spirit. And for the sake of His own dearly beloved people, God has enabled me to write these things.

This book is for the body of Christ and all who would be a part of it. The contents are not contrived. They are revealed and eternal. They will heal broken fellowships in Christ's body. They will enlighten and encourage and embolden. They will set free. They will bring peace, give joy, and make room for the perfect love of God.

With my heart, I give thanks to God for my determined father, who would not compromise his heavenly light for earthly convenience. God will reward him the reproach he suffered for the name of Jesus. And to the saints who have supported him and other ministers with this healing message, this work belongs as much as to me. For without their prayers, patience, and exhortations I might have fallen to wolves long ago.

To every brother in every place, grace, love, and truth, and the fellowship of the Spirit, be your soul's world. And may the things you now read work God's will in your heart.

Introduction to the Third Printing

Much has changed over the twenty-eight years since this, my first book, was produced in 1980. My father, "Preacher Clark", died on Passover morning in 1989, at the age of 88, and mother died in 1985, one day short of her 58th birthday. Except for Uncle Joe's widow, Aunt Myrtle, all the other old saints have passed on, too: Sister Dell, Sister Millie, Brother Frank, Uncle Joe, Aunt Leatha, Sister Manning, and the rest. In 1992, lightning struck the farmhouse Grandpa built, the house where the saints had met and prayed for many years. Aunt Leatha watched helplessly as her birthplace burned to the ground. She was the first child born in that house (in 1921) and the last person to live there.

As those old warriors of the faith were leaving to go to their eternal home, God was adding souls to comfort us, and another generation of saints is now being brought up to know the truth and to love it.

Jesus taught me the lessons you will read in this little book, and I am trusting him now to give you the discernment you will need in order to determine whether or not I am telling the truth.

My journey of faith began when I humbled myself to Christ in those little country prayer meetings so long ago, and that journey continues as I humble myself to Christ now to listen to the Spirit of truth and obey it. I cannot adequately express my gratitude for the faithful hearts who have encouraged me from the beginning to follow the sometimes astonishing voice of Jesus, no matter where that voice led me: my wife Barbara, whom God sent me as a gift I can never repay, Earl and Betty Pittman, my elders in the Lord and spiritual children of my father as much as I, Glen Bartow, "an Israelite indeed, in whom is no guile," and Ellen Payne, my kinswoman within and without. I mention their names as a small token of my gratitude for the love of God they have shown me over these many years and through great trials. God alone can give them a fitting reward.

To the saints of God everywhere, but especially to the dear saints who gather at my house, I humbly offer this third edition of my first work. May God keep your hearts in His love until we meet in heaven, and may He richly bless you forever.

The only credentials that exist in the kingdom of God are the credentials of the anointing of God. Earthly academic degrees and religious titles are utterly worthless for edifying the saints. In Matthew 16:17-18, Jesus told his disciples that only what is revealed by God would edify the household of faith. In other words, only what comes from the Father is safe for the children.

God loves His children with all His heart. That is the reason that we see, throughout the Bible, the death penalty imposed on men who taught God's children false doctrine. The four chapters in this book are ordained by God for you to read. They are the result of four revelations from Jesus to me as a young man. I did not devise these things or glean them from other men's teachings, and the truths presented in this book will stand the test of the Scriptures and of the Spirit.

I begin each chapter with a brief description of the moment Jesus spoke to me concerning the truth taught in that particular chapter. Those four experiences from God are my authority, and my only authority to write these things to His precious people. But that is enough. 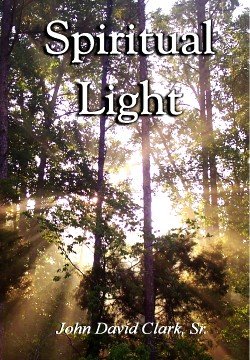